There's a lot of noise around trade these days. Let's see where trade could actually take us in the years ahead.

Anabel Gonzalez, senior director for the World Bank Group’s Trade and Competitiveness Global Practice, offers her views on mega-regional trade agreements, the role of trade in reducing inequality and the importance of international cooperation and domestic policies in making globalization work for all.

What is the importance of trade in the global economy?

Despite recent weaknesses, since 1950 the share of GDP made up of trade and the volume of world trade has increased significantly.

In 2015, global merchandise trade in value terms was $16.4 trillion – in volume terms, this is more than 3 times larger than in 1990. Foreign direct investment, increasingly intertwined with trade, has grown almost seven-fold during this period.

Developing countries have expanded their participation in both trade and investment flows, experiencing high and sustained growth and halving the number of people living in extreme poverty.

An increasingly integrated economy coupled with technological advancements is behind these results which, notwithstanding many outstanding challenges, are quite impressive.

It is through multilateral cooperation and economic integration, through trade agreements, that we will be in a better position to manage globalization.

Why are some people opposed to free trade agreements like TPP and TTIP?

AG: There is a backlash in some countries against trade agreements and more broadly, globalization.

Opposition may be rooted in different grounds.

Some of the opposition may relate to the content of the agreement – there are provisions in these agreements that are contentious.

Part of it may be associated with a misunderstanding of the content of the agreements.

“ Responding to trade opposition can be organized around three key elements: be open, be proactive and be engaged. ”

Opposition may also arise from the perceived impacts of the agreement.

Though the agreement may benefit society as a whole, there is also a concern for groups or individuals who may be impacted or who may not have the skills to take advantage of the opportunities.

In the domestic political debate, opposition to trade agreements may also be used as a bargaining chip to achieve other objectives, or sometimes it may also come down to ideology.

This backlash needs to be taken seriously, and it merits a response.

The response can be organized around three key elements: be open, be proactive and be engaged.

Can you expand on being open?

AG: By being open, I mean that some of the criticisms expressed merit consideration. For example, market opening can lead to short-term adjustment costs, which can be painful.

Second is that deep integration is a different ballgame. It is not the same to eliminate tariffs as to harmonize standards.

“Policies to increase productivity and sustain demand are key, both at the country level, but also at the global level. ”

Consumer concerns need to be taken into consideration – and this is part of the discussion surrounding the negotiations of the Trans-Atlantic Trade and Investment Partnership (TTIP).

The only way in which an economy will be able to create new jobs and better opportunities is through productivity-led growth.

Policies to increase productivity and sustain demand are key, both at the country level, but also at the global level.

And the final element is to be engaged.

One must also recognize that there is a lot of irrationality in the public discourse.

The fact is that trade agreements are needed to manage increased interdependencies and that they can lead to welfare gains.

Policymakers need to share evidence and to educate the wider audience, while tackling head-on some of the unfounded arguments being made.

[Also on Longitudes: Shining a Light on Trade]

What will happen to trade in coming years?

AG: At 3 percent, global trade in 2015 is in its fourth consecutive year of sluggish growth relative to the pre-crisis average of 7 percent. 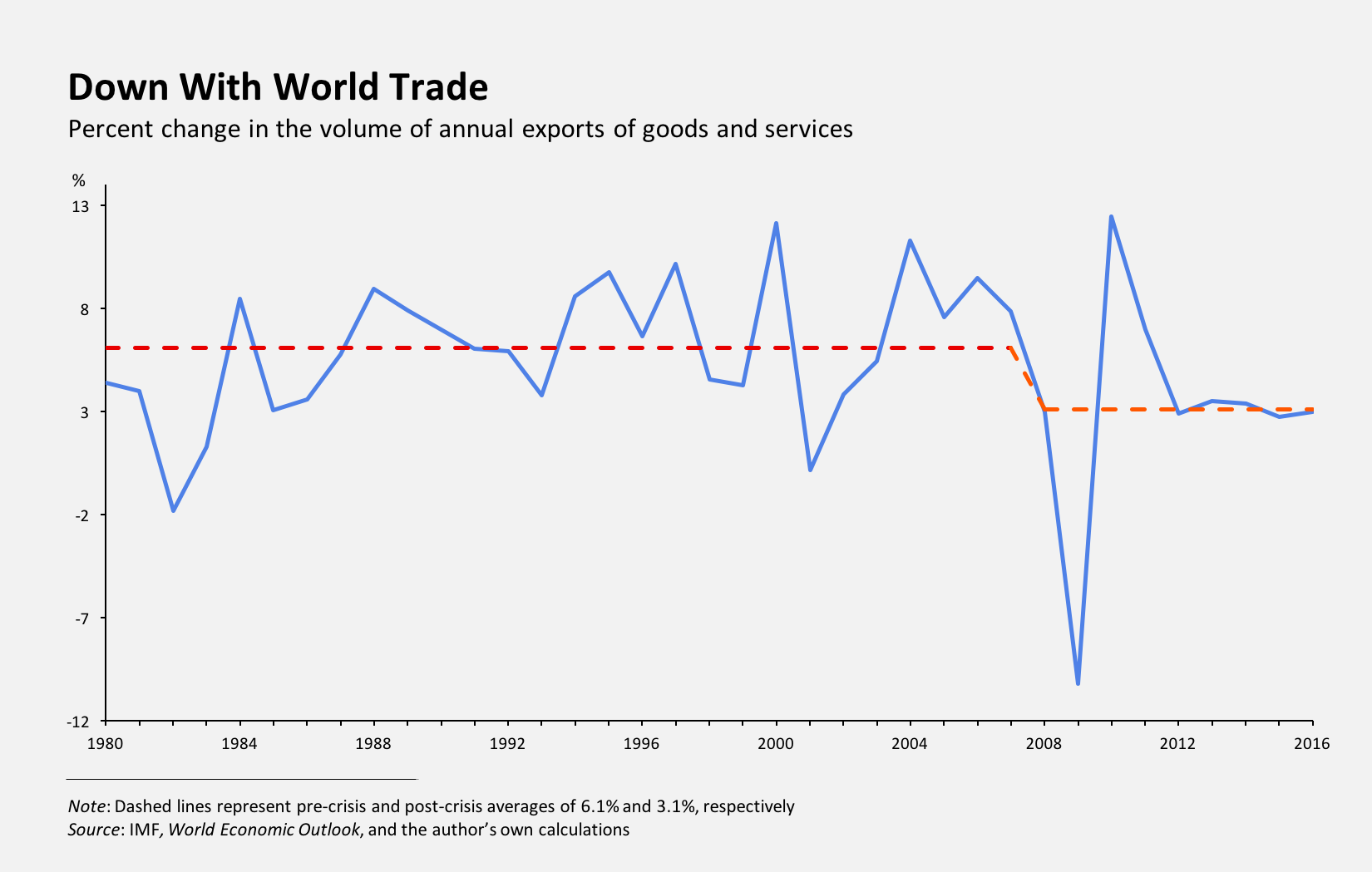 Global trade performance is also slightly below real GDP growth. In this rather negative context, we have been observing some new energy in trade negotiations.

Though most of the action is currently at the mega-regional level like the Trans-Pacific Partnership (TPP) or TTIP, one must also not forget that the WTO has scored some important achievements with the Trade Facilitation Agreement, the expansion of the Information Technology Agreement, the decision to eliminate agricultural export subsidies.

Now, the key issue is whether these mega-regional trade agreements will facilitate the integration of developing countries into the world economy.

What we have seen at the World Bank Group suggests that the TPP can deliver substantial output gains in member countries.

Developing countries for instance, like Malaysia and Vietnam, are likely to get the largest benefit.

But in order for them to reap the potential benefits from TPP, countries would need to complement its implementation with productivity enhancing domestic reforms that would unlock supply-side constraints, including establishing a sound business climate, reducing barriers to foreign direct investment and strengthening competition, among others.

“ Trade is very much behind the success of these developing countries. ”

That said, there are concerns that the mega-regional agreements could undermine the relevance of the multilateral trading system.

We must find creative ways of providing a new burst of energy to the system, and this includes agreements under the WTO umbrella that could then be extended to other non-members.

It also means stepping up the monitoring and the evaluation of the key provisions of these agreements by the WTO and other international organizations, and then refocusing WTO negotiations on trade cost reduction — a concept that is very relevant.

What about the backlash against trade agreements?
AG: There are different actors and different stakeholders in the public discussion in different countries, and they bring their views — their very important views — to the table. Negotiations must follow their course.

But it is important to bear in mind that for trade to continue to deliver its economic benefit, it must be underpinned by strong rules and disciplines to support the integration of markets.

Globalization requires these rules to be able to deliver on its economic benefits.

It is through multilateral cooperation and economic integration, through trade agreements, that we will be in a better position to manage globalization.

In parallel to international cooperation, domestic policies in the areas of education, health, safety nets, better business environments and improved infrastructure are important to make globalization work for all.

“ Inequality is a complex phenomenon. It is difficult to define, to measure and to compare across countries.”

AG: Inequality is a complex phenomenon. It is the result of multiple and diverse economic forces. It is difficult to define, to measure and to compare across countries.

But, it is important to distinguish two different dimensions of inequality.

First, we have what we call global inequality. That is inequality across persons in the world irrespective of their country of residence.

This is explained in large part thanks to the rising fortunes of the developing countries, in particular, China, but to a lesser degree, India and others.

Trade is very much behind the success of these developing countries. However, more trade is needed to eliminate poverty and to reduce global inequality.

Since 1990, there have been studies, including those conducted at the Bank Group, which have shown that inequality has risen in advanced countries, with a few exceptions, and in some developing countries.

It is important to remember, though, that there is no one-size-fits-all approach to battle inequality.

“ Trade is needed to eliminate poverty and to reduce global inequality. ”

Most developed countries have the human and economic resources to develop and implement equality policies in these areas.

In the case of many developing countries, the least developed in particular, international cooperation is fundamental.

[Also on Longitude: Reason, Reality and the Future of Trade]

What is the future of globalization?

AG: Throughout history we have seen that it is sometimes easier for policymakers to blame domestic problems on foreigners.

That is the tendency that underpins protectionism or isolationism.

But the reality is that any quick measures that aim at keeping foreigners at bay – be it goods or services, capital, ideas, or even people — is like attempting to find a quick fix.

And there are no quick fixes.

There are difficult and important questions that need to be answered on how to deal with dislocation costs and how to bring all into the benefits of trade.

Anabel González Anabel Gonzalez is the Senior Director of the World Bank Group Global Practice on Trade and Competitiveness.