Activists, volunteer groups and corporations are helping refugees settle into their new environments, but it’s not easy.

“They didn’t go out in public at all,” says Joung-ah Ghedini-Williams, an emergency response coordinator for the United Nations High Commissioner for Refugees (UNHCR), recalling a Syrian couple she met in Berlin in February.

The young parents of three children – a 4 year old and infant twins – had tried to wait out the bloody civil war in Syria.

But then they lost their family’s two electronics shops and home after military skirmishes forced them to flee the city of Homs.

The couple found an apartment near Aleppo, Syria, one of the world’s most dangerous cities.

They kept their children inside day and night. Then, on one rare occasion, the mother let their oldest son play on the balcony.

Explosions cracked outside. The boy’s scream ripped through the air.

“ Corporations have a role in resolving the crisis. ”

“She went out, and a severed arm from a victim had flown over into the balcony,” Ghedini-Williams says.

And with that, the parents decided they all had to leave Syria.

They took what belongings they could and eventually made it to Europe after crossing into Greece on a dinghy.

“The mother said: ‘We were either going to die in Syria, or we were going to die on the ocean,’” Ghedini-Williams recalls. “They really captured why we need to offer asylum.”

This family is part of a larger movement of refugees seeking safety.

Some 4.8 million refugees have poured out of Syria since 2011, with many traveling through Greece to countries like Germany and Sweden, which have earned reputations for being relatively welcoming to outsiders.

Others from conflict-stricken areas such as Afghanistan and Iraq are also escaping their countries.

Governments, nonprofit groups and volunteers in Europe are faced with the challenge of helping these people settle in foreign lands.

The refugee situation has evolved significantly over the past two years. It was chaotic in 2015 as an influx of people started to overwhelm Europe.

At the peak of that year’s movement, about 6,800 refugees per day crossed into Greece, which is the closest European nation for many people coming from the Middle East.

For the year, more than 1 million arrived in Europe by sea. 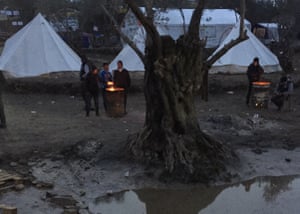 Those figures have dipped in 2016 due to stringent European border regulations implemented in March.

An average of 46 refugees per day arrived in Greece in July, and there have been 271,218 arrivals by sea in Europe for the year.

However, the border tightening has left about 57,000 in-transit refugees stuck in Greece, often separated from family members.

“They don’t know if they can leave, or when,” says Lena Panagiotarea of Athens’ Volunteer4Greece, which will be renamed Ethelon in September. “Thirty-two percent of those are kids, and the big issue now is trying to find accommodations to help them build a proper life.”

“They feel like they’ve survived the war, and yet they’re in this state of flux,” adds Ghedini-Williams.

The situation also has resulted in Middle Eastern host countries such as Turkey, Lebanon and Jordan becoming overburdened.

Developing nations host 86 percent of the world’s refugees – 13.9 million – compared with 2.2 million in places like the EU and North America. Ghedini-Williams says she believes developed countries must be more open to accepting refugees.

Volunteer groups are offering guidance and support for refugees in these volatile environments.

They’re also working to foster an inclusive atmosphere in European communities where refugees might not be welcome, says Meridith Rentz, chief of staff for Points of Light, a U.S.-based nonprofit that mobilizes volunteers globally and works with companies on their employee volunteering efforts.

“If you’re willing to take the risk to pack up your family and leave your home country, you are a pretty amazing, self-sufficient, capable person,” she says.

“So instead of looking at refugees as a problem, we can flip the script and say, ‘How do we tap into the amazing power and skills of these individuals?’ That really changes the narrative.”

In Athens, groups are helping to turn former schools and hotels into overflow housing.

Having a stable home base is critical because poor conditions in refugee camps are an issue.

“It was really difficult to visit some of the sites in Greece because you’d have thousands of people, with one latrine per thousand,” Ghedini-Williams says.

Beyond a safe and sanitary home, nutritious food and access to Wi-Fi are needed.

“Refugees need to be connected with their family group,” Panagiotarea says. “And if, for example, you want to have an application for asylum, some information is provided through the internet.”

As refugees look to integrate into their new home communities, Rentz points out opportunities for crowdsourcing technology and apps that can help teach language skills, educate children who aren’t in school, post job alerts or facilitate simple human bonding.

“It’s about figuring out how we can help them through the transition as they’re building new homes and new lives,” she says.

“Every single person is like their own universe,” adds Kathy Hertz, who organized the DCRally4Refugees in August.

“You do the best you can, and you give everything you have to the person in front of you.”

Corporations have a role in resolving the crisis as well.

Last year, Points of Light and its affiliate Volunteer4Greece helped to enable the delivery of 1,408 relief kits from the UPS Foundation to the International Rescue Committee (IRC) in Greece to distribute to families living in the refugee camps.

On a larger level, UPS has contributed more than $3 million to the crisis, transported more than 28 ocean containers of relief supplies and created the UPS Relief Link tracking system for the UNHCR to ensure fair supply delivery across locations.

Laura Lane, UPS’ president of global public affairs, spent time volunteering at a refugee camp in Berlin in March, and was moved by the impact that small gestures can make.

“The refugee crisis isn’t a European, Middle Eastern, African or American issue,” she says. “It is a human issue.”

Lane emphasizes that to better respond to the crisis, governments and global businesses like UPS need to work hand-in-hand, forming new partnerships and sharing information.

““The refugee crisis isn’t a European, Middle Eastern, African or American issue. It is a human issue.””

Those partnerships, she suggests, are essential to helping both the refugees themselves and the countries absorbing the impact of the unprecedented flow of people.

Ghedini-Williams still keeps tabs on the family of five she met in Berlin this year.

The oldest son now attends a local school, can speak German and sometimes translates for his parents.

The family has taken big strides in forging a new life.

Stories like theirs will be common as serious conflicts persist in Syria, Afghanistan and Iraq. And dedicated groups and volunteers will still be needed to keep giving displaced people guidance, security and community support.

“In many ways, it’s the jackpot for refugees to become resettled,” Ghedini-Williams says.

“But at the same time, that also involves a tremendous amount of trauma in recognizing they probably will never be going back to their home. Making them feel like they have another landing pad or support system makes a huge difference.”

This article originally appeared on The Guardian on August 29, 2016, and was republished with permission.

Jill Hilbrenner is the Branded Content Director at The Guardian.