How do you tackle air pollution in cities? With WiFi-emitting birdhouses, of course.

It may be one of the world’s most bike-friendly cities, but Amsterdam could do more to improve its air quality, according to a report that grades efforts by European cities to cut transport emissions.

This was partly because, unlike other European cities, the Dutch capital has not introduced a low emissions zone.

Mind you, none of the 23 cities on the list achieved an A grade.

Milieudefensie, the Dutch branch of Friends of the Earth, recently revealed that air pollution exceeded the EU’s recommended limits in 11 places in the Netherlands, including Amsterdam.

But one Dutch start-up has proposed an innovative way to tackle the problem: smart “birdhouses” that light up and emit free WiFi when air pollution reaches a healthy level.

The TreeWifi devices are the brainchild of local designer Joris Lam, who explains that they aim to reward citizens for making environmentally friendly choices.

“I wanted to make something that measures air pollution locally and also makes the issue visible in an understandable, human-centric way,” he said.

The boxes contain sensors that measure air pollution levels within a 100-meter radius.

“ I wanted to make something that measures air pollution locally and also makes the issue visible. ”

The readings go to a central server to be analyzed, and if pollution falls in the area around the birdhouse, free internet ensues.

“When the server detects a decrease in pollution compared to the day before, it opens up the internet connection the birdhouse has for everyone to use,” Lam explains.

The birdhouses cost approximately $500 each, though Lam says he is exploring ways to make the units more cost-effective for consumers.

Daan Roosegaarde’s smog towers, showcased in Beijing, suck up polluted air, clean it and release it back into the atmosphere. The captured smog is then transformed into diamonds.

[Also on Longitudes: Putting a Price Tag on Pollution]

The cost of air pollution 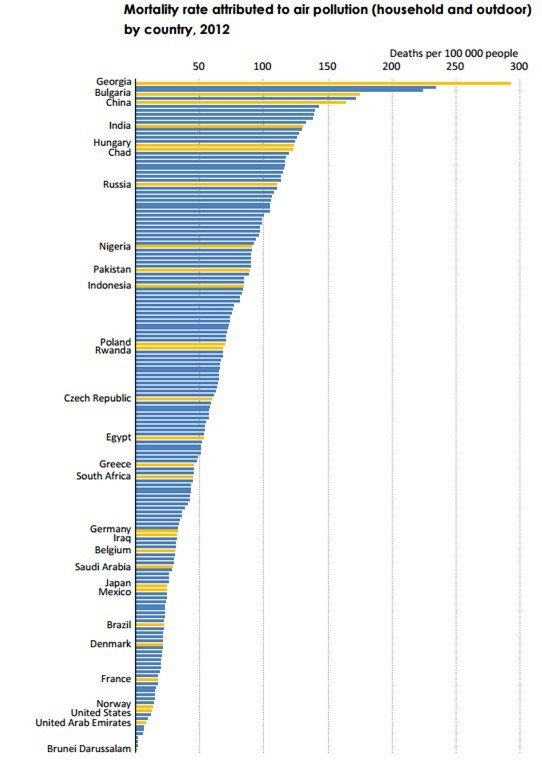 Although premature deaths caused by air pollution are declining in Europe overall, it remains a major problem, particularly in some countries.

A study by the World Health Organization estimated that air pollution causes 600,000 premature deaths a year across Europe; and the cost to economies in the region is a staggering $ 1.6 trillion a year.

The largest numbers of premature deaths as a result of air pollution are mostly in Asia and Africa.

But when figures are adjusted to take account of population size, high rates of mortality also occur in parts of Eastern Europe, as this table from the International Energy Agency shows.